In this guide we will walk you through building your own LoRa®-enabled device from end-to-end using an Arduino board and Dragino shield. We are using a moisture sensor in this tutorial, but there are many potential uses for LoRa devices; alternative sensors for your device could include temperature, humidity, motion, air quality, light, accelerometers, and more.

What are LoRa and LoRaWAN®?

LoRa, is an RF modulation technique which allows for extremely low powered wireless communication systems. Since the frequencies used are orders of magnitude smaller than other common wireless communication methods, such as Wi-Fi, the range of transmission is much larger; up to 10 miles or more in rural areas with a clear line of sight. Coupling this long-range transmission with ultra-low power requirements makes LoRa an ideal choice for battery-powered Internet of Things (IoT) devices with applications that need to communicate with widely-distributed systems.

LoRaWAN® is a standard based on an open-source specification. In short, LoRaWAN is an example of a low power wide area network that is based on LoRa radio modulation. This standard allows device built with LoRa chipsets to wirelessly connect to the internet and helps ensure compatibility of devices among manufacturers around the world. It is even possible, as we will outline in this guide, to build your own custom LoRa -enabled end device that can transmit information to other LoRa devices and the internet via a LoRaWAN network server. 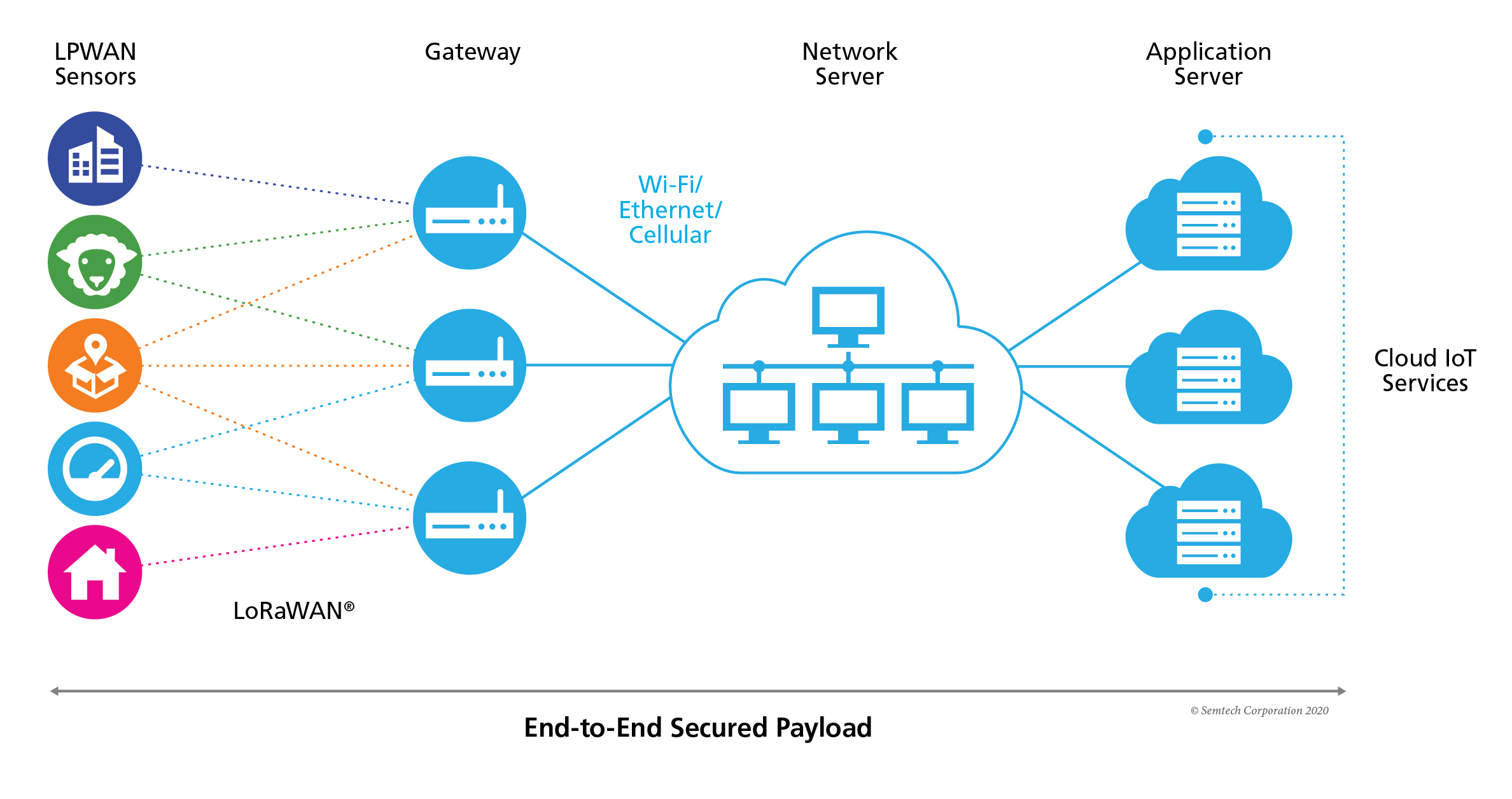 The architecture of a LoRaWAN network is shown above. The end devices transmit their payloads in what are known as an uplink messages, to be picked up by a LoRaWAN gateway. A key aspect of LoRaWAN is that a device is not associated with a single gateway. Its payloads may be picked up by any number of LoRaWAN gateways within the device’s range. In theory an entire city could be covered by a just a handful of gateways and messages from devices belonging to any user could be detected anywhere in the city.

The gateway then passes messages to its associated network server, usually carried out over Wi-Fi or Ethernet. However, cellular and satellite gateways are available to enable very remote solutions without relying on an internet connection. There are various options for network servers, described in this guide. Following the instructions in this article you will use the Semtech Network Server, which allows you develop and prototype with up to ten devices and three gateways.

Common uses for a downlink message are to update a device’s broadcast settings, for example, to trigger updates more or less frequently, or trigger some other action, such as causing a device to open, closing a water valve, or turning an A/C unit on or off.

For a detailed look at LoRa and LoRaWAN, including RF modulation, more information on architecture including the technical detail on how devices join the network using a Join Server, and different classes of devices, refer to our technical paper on 'What are LoRa and LoRaWAN?'

What Will You Build?

This guide is split into three stages:

If you are limited by time, budget, or hardware availability, it is possible to complete Stage 1 and then either:

By the end of this tutorial you will know how to: