Being able to perform remote firmware upgrades over-the-air (FUOTA) is becoming a requirement for most Internet of Things (IoT) devices. The details of any FUOTA procedure are tightly linked to the MCU architecture used by the device. However, any FUOTA system requires an efficient and secured file delivery system to reliably push the firmware patch file to (potentially) many devices simultaneously. LoRaWAN® provides such a secured and reliable file distribution system using multicast. This service is provided by a set of application layer packages. This paper presents two of those packages, which form the basis of the LoRaWAN file distribution service: the “Remote Multicast Setup” package and the “Fragmented Data Block Transport” package.

Updating firmware over-the-air is a complex task. Generally, the following steps are involved:

Some of these steps (2, 3, 5, and 6) are very device-specific, and depend on many design choices, including but not limited to:

Such constraints make it impossible to standardize a FUOTA process that will work for every device in every LoRaWAN network. An additional challenge is the low bit rate intrinsic to LoRaWAN networks.

However, efficient and reliable transport to push firmware patches to a large group of devices through a LoRaWAN network is possible. Furthermore, LoRaWAN has a radio multicast capability. This means that a given radio packet transmitted by the network (containing a fragment of the firmware patch) may be received by many devices. This way, the patch file does not need to be transmitted individually to each device. FUOTA over LoRaWAN overcomes the low-bit rate issue by transmitting the patch file to all devices at once.

With LoRaWAN, there are two primary application layer packages for FUOTA: 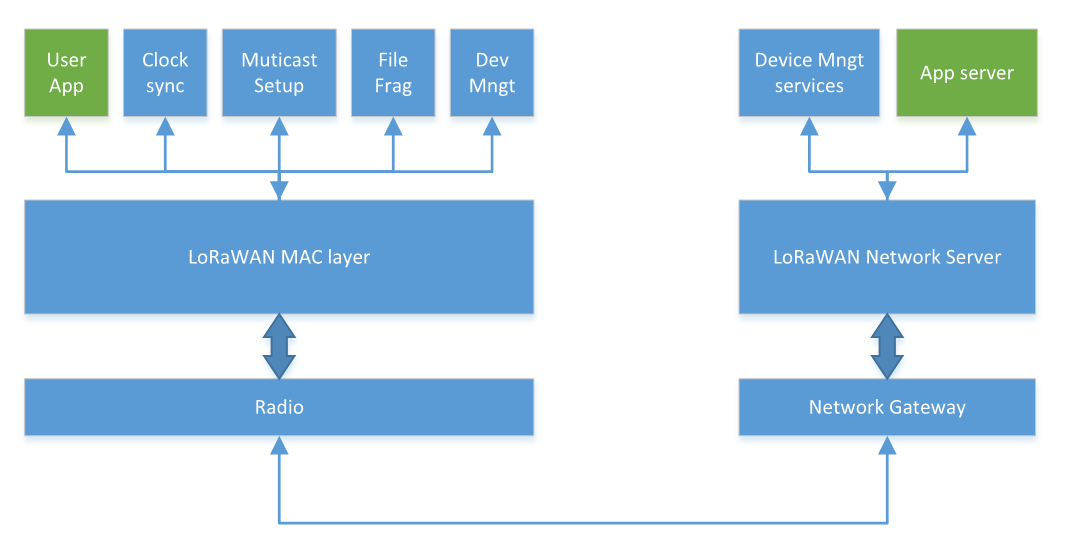 Each package on the device corresponds to a service implementation on the server side. For example, the “clock synchronization” package communicates with a clock synchronization service implemented on the back end. In Figure 1, all back end services related to FUOTA are grouped together in a single instance called the “Device Management Service.” Each of these packages uses a different port to communicate over the air. This way, the different data streams that correspond to each package can easily be separated in both the uplink and downlink directions.

The first step in updating firmware over-the-air in a LoRaWAN network is to identify and list the devices that need to be updated and place them into a LoRaWAN multicast group. This group can be created dynamically and be set up over the air. To do this, use the functions offered by the “Remote Multicast Setup” package.

Every device in a LoRaWAN-based network is equipped with a unicast identity consisting of a device address (32 bits) and a unicast security context (a set of AES128 keys) that are used to uniquely identify and authenticate the device on the network.

If a device is part of more than one multicast group, the addresses of those groups must be distinct in order to differentiate among them.

Creating the context, however, is not sufficient for operating a multicast group.

LoRaWAN-based devices are low power and rely on a battery. These devices normally wake up only when they have data to transmit and then immediately go back to sleep. Therefore, to be able to transmit a frame to an entire group of devices, the system must first make sure that all of the devices within the multicast group have their receivers active at the same time and for the same duration.

To address the issue of ensuring that the receivers are all active at the same time, LoRaWAN networks use the GPS time (GPS epoch) as a time reference (This was chosen over UTC time because GPS time can be represented simply by an unsigned 32-bit counter, incremented by exactly 1 every second, independent of leap seconds. For an in-depth understanding of leap seconds, see https://en.wikipedia.org/wiki/Leap_second).

There are different ways to synchronize the clocks of LoRaWAN-based devices to the network’s time:

The decision of which techniques to use will be based on the trade-offs of power consumption, application requirements, and timing precision. A discussion of these trade-offs is beyond the scope of this document.

Once the device clocks are synchronized, the Device Management Service must program the devices to open their receivers simultaneously, and to use the same radio channel and data rate. For this purpose, the Remote Multicast Setup package allows you to define either a Class C or Class B multicast session.

This method is simple and does not require a very accurate timing synchronization. A few seconds of drift among devices will not create any issues. However, for the duration of the Class C session, the devices in the group leave their receivers on continuously. Therefore, this method is not power-efficient in regions where the network is obliged to respect a low transmission duty cycle (for example, less than ten percent in Europe). A ten percent duty cycle means that 90 percent of a device’s energy is wasted during a Class C multicast session.

This being the case, the package also supports using Class B multicast sessions. When a Class B multicast session is used, all the devices in a group must first synchronize with the Class B beacon (which broadcasts every 128 seconds) before the session starts. Once the session has begun, the devices in the group open periodic reception slots simultaneously, and they stay open for the duration of the session. This enables the devices to duty-cycle their receivers while still spending most of their time asleep.

Note: The network might not use every one of the available slots to transmit information. However, Class B mode is slightly more complicated to implement than Class C, and requires the network to broadcast the Class B beacon.

LoRaWAN is one of very few radio protocols that enables true multicast transmission over the air. For example, Cellular networks emulate multicast transmissions by setting up as many simultaneous unicast sessions as there are devices in a group. However, in this scenario, the data is actually sent as many times as there are devices in the group, rather than just once.

The Multicast Remote Setup package does not make any assumptions about the nature of the data frames being transmitted by the network during a Class C or Class B multicast session. The data frames, for instance, could be individual control frames (ones that turn an entire group of streetlights on and off, for example).

Therefore, during a multicast session, it is necessary to implement a means of efficiently fragmenting a file and ensuring complete delivery to every device in the group. To this end, the ”Fragmented Data Block Transport over LoRaWAN” package has been created. We will discuss this in the next section.

Transporting a File to a Multicast Group

The use of radio multicast transmissions improves the efficiency of the network tremendously. Each frame is transmitted only once, and can be received by all devices in the group simultaneously, rather than having to transmit the same frame individually to each device. However it comes with a challenge, namely, coping with missed receptions. Consider the following example:

A network broadcasts 100 fragments of a file to a group of 1,000 devices assembled in a single multicast group. The radio channel experiences interference, causing each device to randomly lose ten percent of the frames that are broadcast by the network. If the network were transmitting to a single device (unicast transmission) this would not be a big deal. In this case, while a fragment might need to be repeated when lost (which occurs about ten percent of the time) on average it would take 110 transmissions to successfully push 100 data fragments to a device.

However, this is more complicated in a multicast group. The first fragment broadcast by the network, on average, is received by 900 of the 1,000 devices. This means that 100 devices do not receive the first fragment. Therefore, the network transmits it again, this time (on average) ten of the remaining 100 devices will receive it. The network transmits the fragment for a third time, and one device will likely still miss it. So, on average, it takes approximately four transmissions of the same data to ensure that all devices receive the complete fragment. This number only grows if the number of devices in the group or the error rate are increased.

Thus, a different method must be used to guarantee that all devices receive the full file without having to repeat every fragment multiple times.

To overcome this problem, the “Fragmented Data Block Transport” package implements an erasure correction code. The principle behind this approach is this:

Where the repetition method would lead to broadcasting 400 frames, using this coding scheme allows the network to achieve the same success rate while broadcasting only 120 frames.

Prior to sending a file to a device or group of devices, a fragmentation session must be created, providing the device(s) with the details of the file that will be broadcast.

The FragSessionSetupRequest command is used with the following parameters:

Once the FragSessionSetupRequest command has been acknowledged by all devices within the multicast group, the coded fragments can be transmitted.

Although multicast transmissions are more efficient when transmitting the same file to a group of devices, the fragmentation package allows us to send fragments using a unicast downlink as well.

After all coded fragments have been broadcast, the server may query the status of each device using the FragSessionStatusRequest command. This command may be sent as either a unicast or multicast frame.

Devices respond to this command with the following information:

In this paper we introduced the “Fragmented Data Block Transport” and “Remote Multicast Setup” application layer packages, and discussed how LoRaWAN provides an efficient and reliable fragmented-file delivery service. We also explained how using the fragmented-file delivery service can be used to push binary firmware updates over-the-air to large groups of devices. This is achieved by using the LoRaWAN protocol’s unique over-the-air multicast capability in conjunction with an efficient fragment coding scheme, which significantly reduces the number of repeated transmissions required.