Before we discuss antenna tuning methods, think about antenna de-tuning conditions and how to avoid or mitigate them.

These conditions can detune an antenna:

An antenna is a radiating element, typically a fraction or multiple of a wavelength at the frequency of operation. However, as a wave travels through materials that are different from air, its wavelength is reduced by a factor , or the relative permittivity of the medium. Subsequently, an antenna that is designed to be a specific fraction of a wavelength may be too long. Therefore, a PCB trace antenna will need a shorter length compared to a perpendicular wire antenna.

These are typical relative permittivity values: 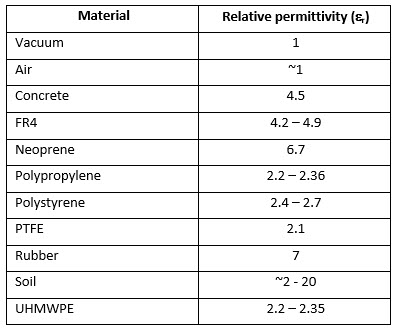 Table 2: Relative permittivity for a range of dielectric materials

The effect of a change in medium on the antenna also depends on the relative position of the antenna to the discontinuity in medium and is most noticeable within a radius of approximately ≤ 0.16l from the antenna. Within this radius, field components strongly influence the antenna impedance at the point where the conducted signal is fed to the antenna. In the 902 – 928 MHz band, the reactive near-field distance is ~52 mm or 2”. Therefore, PCB, enclosure, membrane, potting material, or the medium in which the device is embedded (such as for soil or moisture sensors) will all affect the presented antenna impedance.

You can create a reference design without considering application form-factor constraints. For the end-product, the available area can be constricted and lead to design compromises. For a wire antenna, which is intended to be perpendicular, the antenna can be bent so that the longest edge is parallel to the board. Examples of this mechanism also include PCB ground plane encroachment, conductive or electrostatic materials, such as mechanical supports, controls, displays, and so on.

An encroaching ground plane, or conducting surface, lowers the antenna’s frequency of operation. As a result, you’ll need a shortened antenna. This ground plane mechanism is referred to as capacitive loading.