The VSWR characterizes the severity of the standing wave on any radio frequency (RF) trace or transmission line that results from a difference between the impedance of the transmission line and the impedance of the load presented by the antenna. The higher the ratio, the greater the mismatch. The minimum theoretical VSWR is 1:1. The VSWR will always be greater than this value.

The RL is a measure of the signal returned, or reflected, to the source because of the difference between the transmission line and the antenna load.

While antenna vendors may specify either VSWR or RL, the relationship between the two can be determined as:

The percentage of power reflected due to a mismatch at the antenna can also be calculated:

The bandwidth is the frequency range of the antenna over which the VSWR or RL does not exceed a specified threshold, typically a VSWR ≤ 2:1 or a return loss of -10 dB.

Antenna efficiency is a measure of the radiated power to the power incident at the antenna:

Part of the incident wave is reflected to the source. Therefore, the antenna efficiency will always be less than 100%.

Typically, low-power wide-area network (LPWAN) applications, such as LoRaWAN antennas, are passive devices. Gain should be considered a relative value rather than an increase in overall power radiated, given the units of dBi.

Antenna vendors often refer to an antenna’s peak gain, or the gain in a specific direction. An increase in the gain of radiated power in a specific direction occurs at the expense of gain in other directions. The higher the peak gain, the narrower the radiated power is focused in that direction. While a higher relative peak gain may be useful for specific applications, such as a point-to-point link, in other applications where the positioning of the radio is unknown, this antenna may not be suitable.

Important: Make sure to check the antenna’s radiation pattern to see how the peak and average gain values are related. Then you can determine if this antenna is the best choice for your application.

Antenna vendors may characterize an antenna’s performance by including a series of polar chart plots which illustrate the relative gain of the antenna in a series of different orientations or planes. Referred to as the XZ-plane, XY-Plane, and YZ-Plane Gains, these plots use a spherical coordinates system: 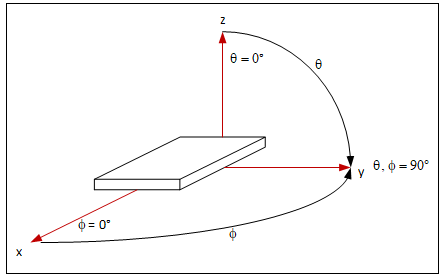 The radiation patterns for each plane are shown in Figure 2.