Prior to sending data, devices designed to operate on a LoRaWAN® network must join such a network. The recommended method for joining a device to a LoRaWAN network is to use the LoRa Cloud™ Join Server. This service is based on the LoRaWAN specification and is used to exchange encrypted information required for providing network session data to the device. It is also required for providing a nonce, which is necessary to symmetrically derive session keys (AppSKey and NwkSKey). The LoRa Cloud Join Server uses a secure external join server that never exposes device keys.

Once a device has been claimed using the LoRa Cloud Join Server, it can use the service to provide the join response in coordination with a LoRaWAN network server. There is a sequence of steps (covered in Claiming a Device) that must be performed prior to using this service.

Device owners should understand that they won’t ever see the root keys for the device when using the Join Server. Rather, the root keys are embedded in the HSM. (The join server doesn’t even see them.)

Prerequisites Specific to to Transceivers: 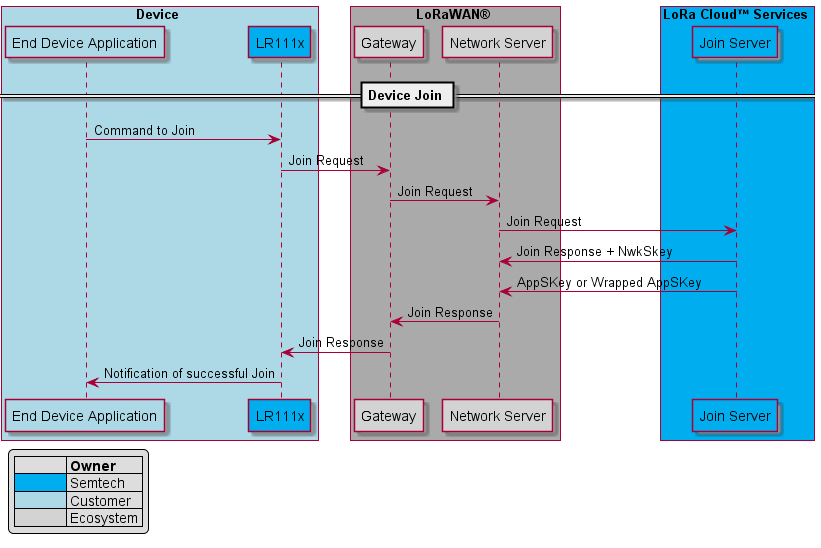 If multiple network servers report the same join request, only the first eligible request will be answered. All subsequent join requests will be rejected.

Key Wrapping: The LoRa Cloud Join Server can create a wrapped AppSKey for a device. A wrapped AppSKey is an additional encryption method applied to the original AppSKey. The encryption scheme and key are known only to the device owner and the LoRa Cloud Join Server, which protects the application contents from being decrypted by the LoRaWAN network server.